The post-modern ‘proof’ of existence seems to me to be a truncated form of Descartes. Descartes started with what he knew you could know: that, in fact, some thing ‘I’ can think. He then proceeded to prove that I was an existence, and then that God must exist. Then since God exists, everything that ‘I’ observe exists at least somewhat like ‘I’ observe it. This framework is far more subjective than I would posit, however it is a usable framework for thinking and living. I made a graph after the nature of reaction profiles. (If you have had some chemistry, you may recognize the format.) As you proceed from left to right you are following the case for the worldview and as you go up, importance increases. 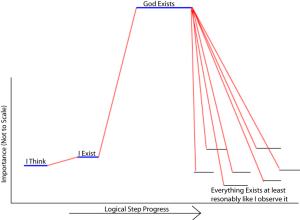 Let us contrast that to a post-modern fully subjective worldview is like.

This latter figure is the new worldview. This worldview has several repercussions. For now, though, I’ll only mention one. Everything includes ideas, thoughts, truth, good, evil, right, wrong, cowardice, and valor. Since existence is defined by the mind and thoughts of the one existing, it is not necessarily the case that something observed by one is true to the other. The only reason, in this scenario, for truth and reality to be agreed upon (such as everyone agreeing on what is green) is social conditioning and pressure. There is no ground for insisting that something is wrong outside of societal norms.

This worldview is antithetical in every way to two things: religions of revealed Truth (Specifically Christianity, but that is another topic for another time.) and science. That’s why I think scientists should swallow their anti-religion pride and make some common cultural cause with the strict traditionalists of the Church in the arena of absolute, knowable, transmittable and immutable truth.

You see, if truth is only a construct of the mind, then science cannot exist. Science depends upon the core belief that the truth is knowable and constant. Our knowledge of it is flawed and in constant flux, in constant need of study, experiment, update and thought. If truth is not timeless and knowable, then a consensus of quality minds actually would define truth and therefore science. If that were the case, then the sun did indeed revolve around the earth for Ptolemy, while much later, after some cataclysmic solar revolution, it now is orbited by the earth due in large part to Galileo.

Every scientist, and probably every person not fully committed to the conclusions of this worldview, would find this ridiculous. And yet one academic department after another has fallen to this worldview. Perhaps because they are not grounded in observation, or perhaps because scientists are a particular brand of curmudgeon, the humanities have fallen first, long ago. Now however, even the hard sciences are under attack. The global warming consensus is (although it mayn’t be a consensus after all) the only consistent argument in favor of the theory and people peddle it as fact. Man-made global warming may indeed be fact, but there is not one model made to predict the future warming that predicted the current pause. When all the models are wrong, it usually means something about the assumptions of the modelers.

Again, if truth is only a construct of the mind, objective religion cannot exist. Religion is demoted to ‘something that makes you feel better’ which puts it into the category of whiskey. 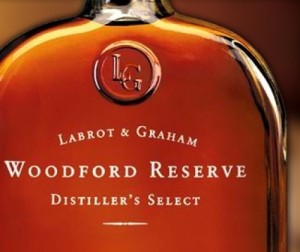 If that is the case, then anything in the religion that makes you feel upset or threatened must not be true –for you. Maybe someone else feels better knowing that God condemns sexual immorality of all sorts, then this religious belief is true for them.  And if a large enough group of spiritual people agree that something is acceptable for god, then, it must be. That of course leads to the absurd idea that god was pleased by the Mayan human sacrifices. If that were the case, then you could very easily argue not just that societies make their own gods in the image that pleases them, but that god must also actually exist for their believing created it. I am sure this scenario sounds more plausible than the Ptolemy scenario above. That feeling is just the result of the overwhelming nature of the subjective worldview in every domain but the hard sciences.

So that is why I recommend not just a peace treaty between traditional Church leader and scientists but active cultural cooperation. The Church is not in any danger of being wiped out by a fleeting theory in the minds of men, but science may well have to come and take shelter inside the doors of the Church, running for sanctuary from those that scientists currently think are science’s friend.

If this happens, you can count on churchmen to preserve everything they can, just like last time the forces of nihilism swept the western world. But before that, why not pick up a sword and fight in the streets of civilization (the enemy is long through the walls) alongside the Church for Truth and civilization and life?